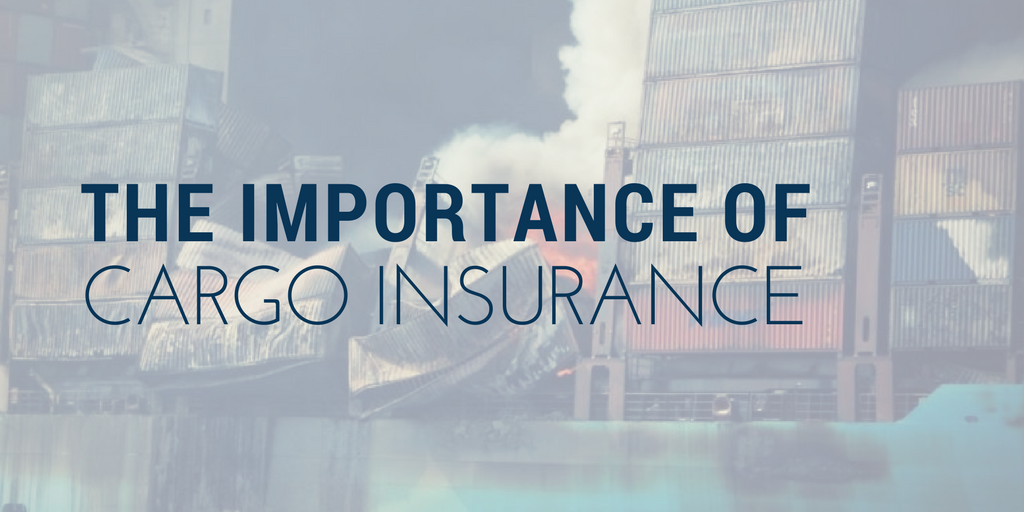 The importance of cargo insurance

In under one month, the maritime shipping industry has seen three accidents. First, a major fire that broke out on the Maersk Honam in the Arabian Sea, which serves as a stark reminder of the perils shipping crews face out in the middle of the ocean. The Singapore-flagged vessel was on enroute from Singapore to Suez with 12,416TEUs on board when the fire erupted. At the time of writing, the fire, which had raged for five days, has been brought under control but four crew members have been reported dead from the blaze.

This underscores the importance of, first and foremost, the safety at sea for the crew. But as a shipper, knowing you have ocean freight on board a burning vessel is worrying. The Indian Coast Guard has classified the blaze as a “chemical fire”, which raises the question of the proper securement of goods as well as the declaration and documentation of all goods – hazardous or not.

”…the best forensic scientists in the world won’t be able to pinpoint what some person who didn’t care had stowed in one of the boxes and which had no business being there.”

Barely days later, a second fire broke out on a separate Maersk vessel, the Maersk Kensington, while travelling from Oman to the Suez. Thankfully, all 26 crew are reported to be safe.

More recently, the collision of two boxships at Karachi forced the port to close as port authorities worked on retrieving 21 fallen containers containing cars and other freight from the water.

Despite being so close, these three incidences do not highlight the frequency at which such occurrences happen in maritime shipping. It does, however, underscore the importance of having cargo insurance.

Why you should always buy cargo insurance

By law, all shipping carriers are obliged to offer a minimum amount of insurance. But as the word suggests, it offers limited coverage. As a shipper, you can and should purchase additional cargo insurance to further protect your merchandise. This would cover your cargo while it’s in storage and in transit until it reaches the safe hands of your buyer.

Each vessel’s stowage list is prepared based on the data on the manifest, which is provided by each and every single individual shipper that has cargo on board. Precise declaration of goods comes into vital play here. Given the large amount of goods that are transported by sea, there is simply no time for customs to physically check and verify the contents of each cargo.

As a shipper, you can only ensure you play your part by filling in all documentation and declaration forms as accurately as you can. This includes the Bill of Lading and packing list, etc. You may have no control over what other shipments go on board the same vessel, or container in the case of LCL shipping, but there is a worst-case-scenario measure you ought to take with every shipment – cargo insurance.

Let’s take the case of the Maersk Honam. Investigations into the cause of the fire will be a difficult process and one that may yield many possible outcomes, with none of them likely to be 100% affirmative. One such outcome may be the misdeclaration of a (hazardous) shipment, which could have sparked the fire. Such mis-declarations, intentional or otherwise, are beyond your control and this is when shipping insurance comes into play.

An incident such as the Maersk Honam fire have wide-ranging complications both financially and logistically. It’ll still be awhile before the 2017-built vessel can be allowed to berth. Port authorities will, understandably, want to make sure that all fire on board have been extinguished and determine the condition of the Honam, which is a process that could take as long as months. And without buying cargo insurance, you’re also running the risk of lengthy delays.

“Upon arriving at port, cargo will not be immediately released. For clients who have insurance, filing the claim with their insurance will help speed up the process of releasing their cargo. Additionally, claims are generally processed quicker through insurance companies and without insurance you may be stuck with the carriers liability which is listed on the back of the Bill of Lading: $500 per unit.”

What is general average?

There’s a concept in ocean freight shipping that everyone involved in the industry should be familiar with – general average.

“A principle of maritime law where in the event of emergency, if cargo is jettisoned or expenses incurred, the loss is shared proportionately by all parties with a financial interest in the voyage.”

Under general average, all losses, including salvage, port and transfer costs are to be split among surviving cargo, if any. In the case of Maersk Honam, the Danish shipping giants declared general average on 9th March.

What this means is that should your container have the misfortune of being placed next to the culprit-container, you’ve probably lost your cargo. Whereas if you had the misfortune (or fortune) of the safety of your cargo, you’re now looking at paying a share of the cost for the vessel damage, the tow, clean up, legal settlements, etc. Plus, your cargo is not likely to be released until said compensation is made.

“Without cargo insurance, your cargo is likely to be held hostage for payment of those charges. Simply said, without insurance, you stand to gain nothing or next to nothing at most.”

What’s covered in your cargo insurance

Cargo insurance varies from shipment to shipment and different insurance companies have different names for them. But, in general, all cargo insurance should cover the physical damages suffered by the shipment due to unforeseen circumstances beyond the cargo owner’s control. These apply to sea accidents, shipwrecks, piracy, etc. All this is provided that the goods have been packed correctly and properly according to their shipment type. The appropriate declaration forms must also be filled in where necessary.